By Catherine White on June 10, 2012 6:14 PM | 2 Comments
Last summer in Maine my morning habit was to get up early with the dog and walk to the south end of the island to look out at the ocean. The dog, being a sociable creature, would rather go to the north end dock to see folks and more canines. After I got my fill of the ocean I would pick a handful of raspberries to go with my oatmeal. This month here at home, after I walk the dog and get the paper, I stop and pick a handful of blueberries. They are a high-bush large variety of berries, a completely different creature than the native blueberries of Maine, but I am happy for my fresh local taste. This is the first year my bushes have really produced. I admire their resilience as they lean way over trying to escape the encroaching forsythia bush. 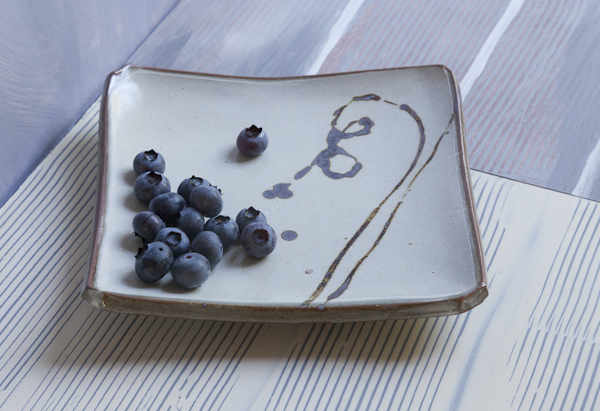 More and more I have come to admire resilience.
Not the simple resistance of a pillow, whose foam
returns over and over to the same shape, but the sinuous
tenacity of a tree: finding the light newly blocked on one side,
it turns in another. A blind intelligence, true.
But out of such persistence arose turtles, rivers,
mitochondria, figs--all this resinous, unretractable earth."

Lovely, Catherine. We'll be in Maine next week, hoping there are still some blueberries around in some form.

in June you will have to come to Va for blueberries. I am sure Maine will be beautiful and maybe you will find some strawberries.

# 9 summer solstice 2012 was the previous entry in this blog.