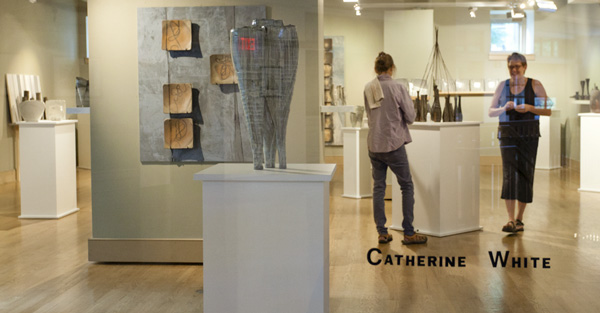 My exhibit at St Andrew's school in Delaware explores the physical connection and visual links between multiple objects. It is a large beautiful gallery and it is a thrill to spread out and see my landscape plates speaking with vases and large coiled jars.

On Friday I gave a demonstration for the ceramics students and then attended an informal talk with the author Junot Diaz and the senior english students. Diaz was inspiring in his discussions of why he makes art and inspired everyone in the room to read more. I am always struck when I am in the room with an articulate artist that  their thoughts  make me want to make more art and be more eloquent about the process. 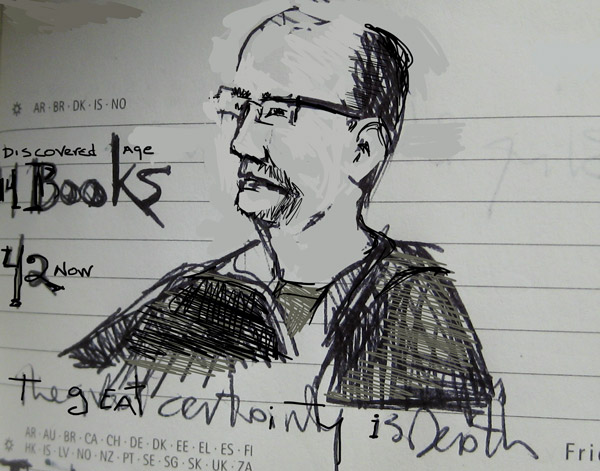 The students asked great questions about permanence, value and use and woodfiring.  When I make pots I reach out with a bowl, cup or a plate and I believe that through the use of these objects a person can be transformed. some times these objects require attention and creativity in order to be used. A user will hold a cup and feel that it was once flexible and holds the impressions of fingers and now it is hard like a rock.  As I walked around the gallery I took plates off the racks on the wall and talked about how I want people to use these plates and see the beauty and roughness at the same time. I want my pottery to be several things at once. I want it to be useful and I want it to be something to look at and at times it will make you reflect on the idea of creation. 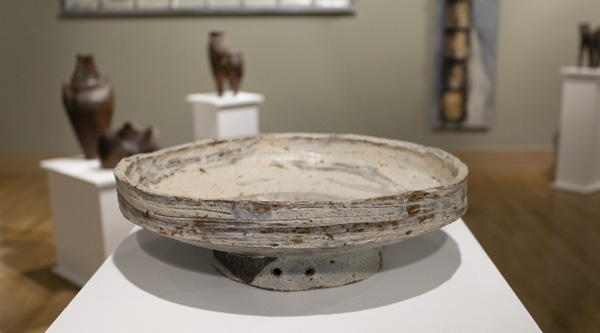 Diaz challenged the students to read. He said its not about writing all the time. I would challenge potters in the same way to look at pots and use them in their daily life.
And if you can't write or make pots? Good. Go read and buy pots and find interesting ways to use them.

By Catherine White on September 14, 2011 8:42 PM | 2 Comments
Even though the summer / fall issue of studio potter got mailed out in late July, I still want to jump up and down and wave the flag and say read it. 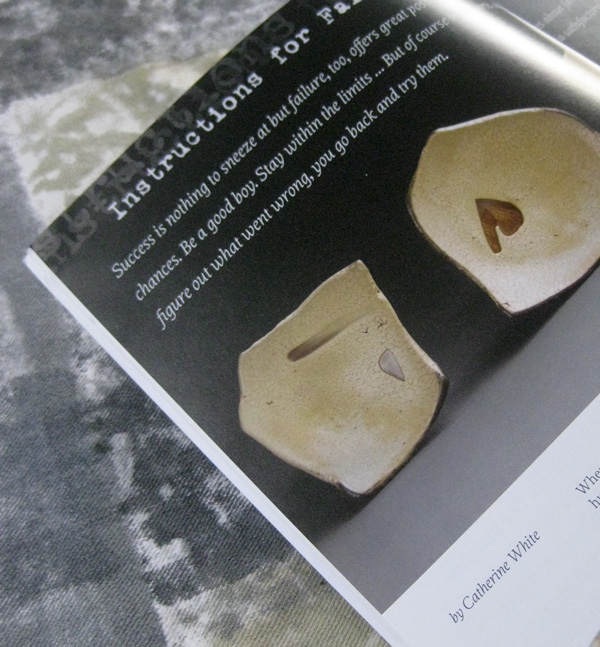 My essay is called instructions for failure.

"Success is nothing to sneeze at but failure, too, offers great possibilities.... We have all sorts of negative notions about failure and so the hidden message is don't risk anything. Don't take chances. Be a good boy. Stay within the limits.... But of course in the arts and virtually anything else that leads a satisfactory life, failure is implicit. You try things, you fall on your face, you figure out what went wrong, you go back and try them."
-- Jules Feiffer (as interviewed by Jesse Rhodes; Smithsonian, September 2010))

This page is an archive of entries from September 2011 listed from newest to oldest.

June 2011 is the previous archive.